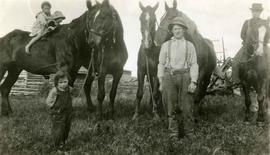 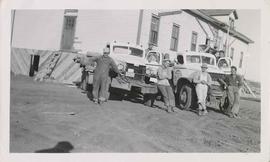 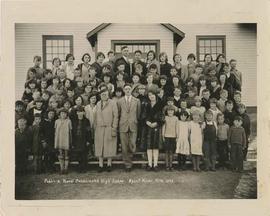 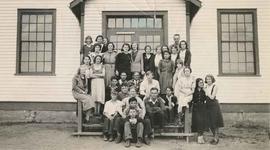 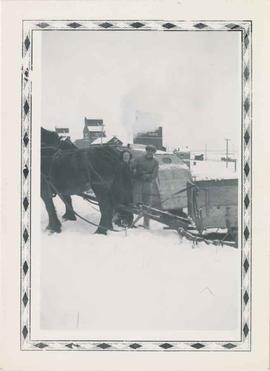 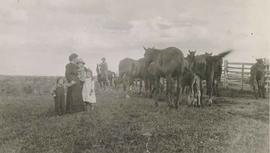 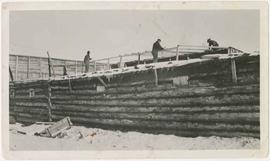 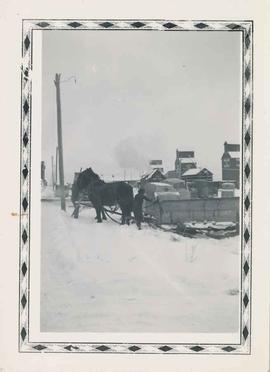 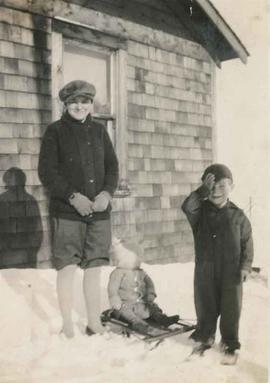 Daniel Vader was born on November 11, 1877 in Napanee, Ontario. He was the youngest son of John and Esther (nee Grieves) Vader, who originally came from Sophiasburgh Township near Demorestville, in the Province of Upper Canada. Many of John’s brothers went to California and later settled in Calgary. John, along with his parents, William and Isabell (nee Black) Vader eventually moved to what is now Belleville. The family had been fairly well established before moving from Sphiasburgh but by the time Daniel was a young man, the family fortunes had waned. His father’s untimely death when Daniel was only five years old meant he was looking for work at a young age with only limited schooling. He made his way West working at logging and lumber camps, as well as working as a carpenter and cook, before moving to Calgary as a carpenter.

Ethel May Scott was born in Dawse, North Dakota, USA on June 13, 1888. She was the youngest child of Henry and Eliza Scott. The family moved to Calgary while Ethel was an infant. She met Daniel Vader while living in Calgary and they married on Boxing Day in 1910. Several years later Daniel moved to Prince George, BC for work, then to a homestead 9 miles North East of Spirit River where his wife, two children (Alice and Edith), and Eliza Scott joined him in 1916. They moved into the town of Spirit River in 1919. Daniel and Ethel Vader raised 11 children together (Alice, Edith, Gladys, Grace, Hilda, James [Jim], Eleanor, Gwen, Dana, Colleen [Dolly], and Delbert [Sonny]). Edith was born on February 16, 1914 in Calgary. Their son, Jim Vader, died while serving in World War II. Daniel Vader died on July 25, 1957 after a fall from a porch roof he was repairing. Ethel died 15 years later on June 29, 1972. Both are buried in the Spirit River Cemetery.

In 1813, John and Margaret (nee Everhart) Grimm married in Jefferson County, Ohio, USA. They eventually moved to Wisconsin, where they died and are buried. Of their nine children, one son, Henry, born 25 Mar 1824, married Catherine Bowers. Henry and Catherine eventually settled with their family near Walnut Grove, Nebraska. One of their sons, Lorenzo Grimm, later married Mary Eleanor Warner of Oklahoma. Lorenzo, Mary, and their family moved several times, including to Saskatchewan and Sioux City before finally settling in Rycroft, Alberta. Lorenzo and Mary had eight children together (Eva, Edith, Asa, Ora, Goldie, Silva, Rainier [Ray], and Ruby). Mary Grimm passed away in 1943. In 1944, Lorenzo married Jenny Whitehall.

Ora Curtis Grimm was born on January 26, 1899 in Lynch, Nebraska. His early education took place at Grimton school, which was named after the family. In 1911, the family moved to Trossacks, Saskatchewan where he finished his education. He went on to complete the Automobile and Gas Tractor Engineer program at Hemphills Trade School Ltd. in Regina in 1920. The family moved to the Spirit Valley District (NE of Spirit River) then to Rycroft. Ora farmed with his father, eventually buying land from Doc Calkin, P.J. Nigel, and Revillion, as well as his father’s land when Lorenzo passed away in 1950.

The Vader and Grimm families came together with the marriage of Ora Grimm to Edith Vader on July 6, 1943. Ora was 44 and Edith 29 when they married. They lived and farmed 2 miles west of Rycroft, Alberta. Ora and Edith had three children: Norma Jean born in 1944, Elnor May born in 1945, and Ray Curtis Bryan born in 1950. Ora died on October 18, 1965 and Edith on January 1, 2011. Ray took over the farm several years after his father, Ora, passed away. Elnor passed away in 2017.

These records were compiled by Edith Grimm and passed down to her children, Ray and Norma Grimm, who donated them to the archives in 2017.

Two oral histories were recorded in 2018 and were donated at that time. They were donated by Norma Grimm and Ray Grimm.

Good condition. Some photographs are torn. Material was not closely organized at time of donation. Most photographs were loose in the boxes.

These records were donated by Ray and Norma Grimm in 2017.

Order was imposed by the archivist to follow a very loose organization that was put in place by the donors. Titles were determined based on the content of the records and discussion with the donors.

A finding aid is available at http://southpeacearchives.org/holdings-2/finding-aids/fonds-676-vader-grimm-family-fonds/