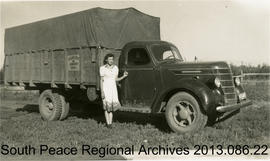 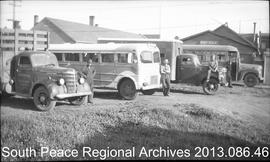 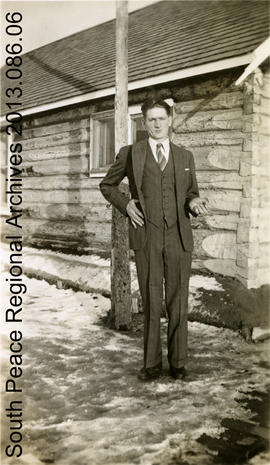 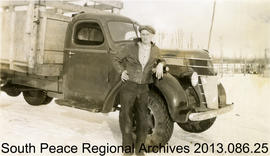 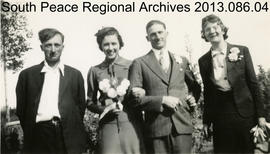 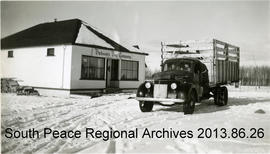 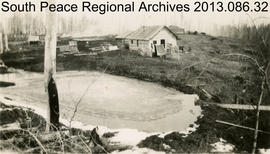 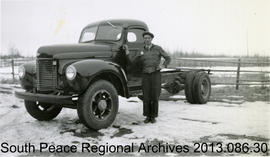 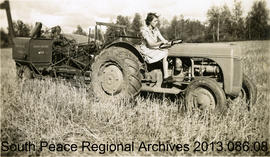 Bill Sargent was born in Scotland in 1912, and came to Canada in 1925. He settled first at Champion, Alberta, but in the fall of 1931 arrived in the Peace River Country. He filed on a homestead at Harper Creek, east of DeBolt. In 1939 he married Clara Enns , from Crooked Creek, and the couple raised four children: Fay, Ken, Jean and Randy.
In the late 1930s, Bill had hired on as a mail hauler for Bill Trottier, who had the mail run from Grande Prairie to Calais (Sturgeon Lake). At that time, the heavy sacks of mail had to be transported over the Smoky River by the aerial ferry during spring break-up and fall freeze-up, a job for a much younger man than Bill Trottier. Besides helping with the mail, Bill Sargent also drove truck for Morrison’s Cash Store in DeBolt hauling wheat, livestock and freight.
In 1940 Ivan Morrison and Bill Sargent formed a firm named “Morrison and Sargent” and got the mail contract. Because of the poor conditions of the roads, the complete mail run took up most of the week. According to Bill Sargent's story on pages 194-202 in Across the Smoky, "The mail schedule called for leaving DeBolt Monday morning for Grande Prairie and leaving from there for DeBolt Tuesday morning. On Thursday morning it left Calais for Grande Prairie and the return trip left for Calais on Saturday morning."
The story goes on to tell us that, “As times began to get better, more and more homesteaders and their wives started going to Grande Prairie. The times weren’t good enough for people to afford cars so the mail truck provided their means of transportation.”
In fact, so many people were using the mail truck that Bill Sargent proposed that Morrison and Sargent start a bus service between Valleyview and Grande Prairie. They applied to the Highway Traffic Board in Edmonton and were granted the franchise, the first bus operation in the Peace River Country. They purchased a 1940 Ford, 29 passenger bus. It was an immediate success. Meanwhile, they were also operating “three International trucks hauling mail, express, groceries, hardware, grain, livestock, lumber, logs, and anything else that needed moving.”
In 1946, the Morrison and Sargent Bus Service was sold to Canadian Coachways Ltd. The Sargent family then built the “Sargent Sales & Service” garage on the corner of 99th Avenue and 100th Street in Grande Prairie. In 1952 it became a General Motors franchise which was sold to Ken Sargent and Jim Hanson in 1969. During this time, Bill served as an alderman for the City of Grande Prairie, and was active in the Rotary as well as the River Rats Club.
After Bill retired in 1969, he and Clara returned to the DeBolt area and built a home on an acreage along the Smoky River near DeBolt. He passed away in 1988 and Clara in 1993. They are interred in the Grande Prairie Cemetery.

The photographs are maintained by the Sargent family. Scans of selected images were donated to South Peace Regional Archives by Sean Sargent in 2013.

The fonds consists of 61 photographs showing various stages in the life of Bill and Clara Sargent: the homestead at Harper Creek, the Morrision and Sargent Bus Service and trucks, the Sargent Sales & Service Garage in Grande Prairie, and the retirement home on the Smoky River.

These records were donated to South Peace Regional Archives by Sean Sargent on October 30, 2013.

A finding aid is available at http://southpeacearchives.org/fonds-570-sargent-family-fonds/