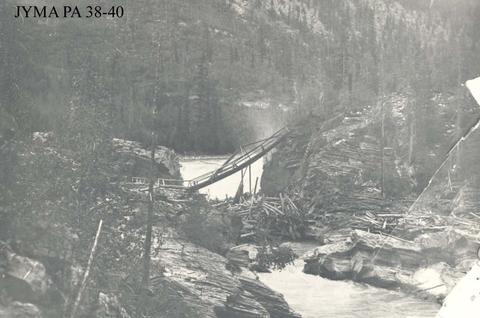 This unusual bridge was improvised by Curly Phillips in 1916 with the help of Ted Abram, Frank Doucette and another man. It was built across a log jam just below Robson Falls on the Fraser River. It washed out on June 25, 1919. This bridge was built to take the dudes and pack outfits into the Robson area after the "Denny Hogan Construction Bridge" slightly lower down the river, had been washed away. Donald "Curly" Phillips (1884-1938) first came to Jasper in 1909 outfitting for Reverend Kinny's attempt on Mt. Robson and A.O. Wheeler's survey of Mt. Robson (1911). He settled permanently in Jasper in 1912, setting up an outfitting business. Over the years he worked on many Alpine Club of Canada camps in the area. He married Grace Inkster (1923). They had three children; Sam (1928), Joy (1930) and Ivy (1932). Curly Phillips was killed in an avalanche in 1938.<br><br>