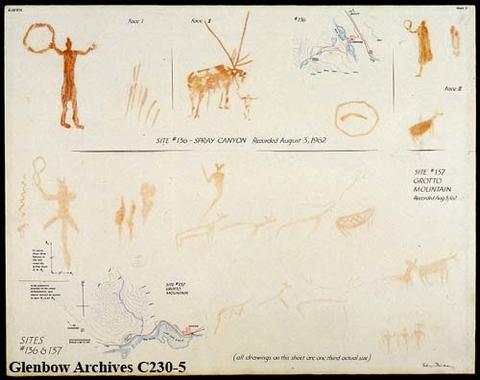 Selwyn Dewdney, 1909-1979, of London, Ontario, undertook a project for the Glenbow-Alberta Institute of interpreting a set of sacred Ojibway scrolls, which had been purchased by the Glenbow. During the course of the project he travelled to Shoal Lake Indian Reserve, Kejick, Ontario in 1969, where he filmed a Midewewin ceremony conducted by James Red Sky. From 1970 to 1972 he wrote a book entitled Sacred Scrolls of the Southern Ojibway, which was published by Glenbow. For further information see Daylight in the Swamp : Memoirs of Selwyn Dewdney. -- Toronto : Dundurn Press, 1997.

Selwyn Dewdney was commissioned by the Glenbow Foundation to record First Nations rock art in western Canada. He developed a method of artwork the art onto rice paper. Site no. 137 (Grotto Canyon near Exshaw) and Site no. 136 (Spray Canyon near Canmore). The original artwork is M-7848-28.<br><br>