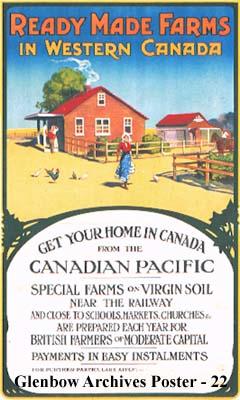 "Ready Made Farms in Western Canada"

On October 21, 1880 a group of Scottish-Canadian businessmen formed an organization to build a transcontinental railway. The Canadian Pacific Railway Company was incorporated February 16, 1881, with George Stephen as its first president. Its intention was to link Canada's populated centres with the relatively unpopulated West. The railway reached Medicine Hat in 1883 and was completed on November 7, 1885. This was six years ahead of schedule, and the last spike of the rail was driven at Craigellachie, B.C., by Donald A. Smith. By 1889, the railway extended from coast to coast and the enterprise had expanded to include a wide range of related and unrelated businesses. Today, CPR has a 14,000-mile network that extends from the Port of Vancouver in western Canada to the Port of Montreal in eastern Canada, and to the U.S. industrial centers of Chicago, Newark, Philadelphia, Washington, New York City and Buffalo. The first Canadian Pacific Railway Station built in Medicine Hat was in 1885. This structure burned down in the 1900's and a new building was erected and opened in July, 1906, with an addition built in 1911. The last Via-Rail train operated in 1990, and since then the Medicine Hat Train Station has mostly sat idle. In 1991 an application was made for this station to be designated as a historic site under the Heritage Railway Stations Protections Act, but was unfortunately denied.

Shows farmhouse and outbuildings with young woman standing in front and man on horseback. Text reads: "Get your home in Canada from the Canadian Pacific. Special farms on virgin soil near the railway and close to schools, markets, churches, etc. are prepared each year for British farmers of moderate capital. Payments in easy instalments. For further particulars apply:___<br><br>