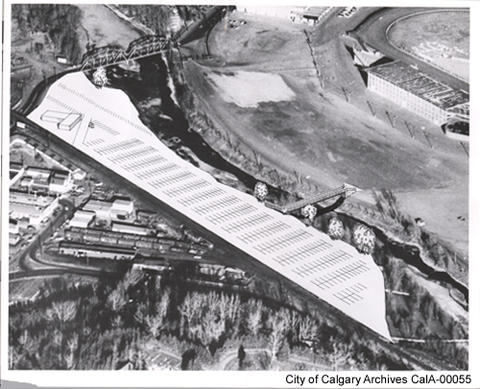 Aerial View of the Elbow River

Item consists of a hand-altered aerial-view photoprint of the Elbow River. Photoprint was taken of 2nd Street SE, on the south side of the Elbow river; The photoprint appears to be a image of another photoprint, which was altered by placing a drawing of a potential development over the existing landscape; The drawing appears to be of a parking lot and several small buildings (the buildings may not be drawn to scale); The land shown may have been owned by Lindsay Estate; This photoprint may have been taken as part of the plan to expropriate part of the Elbow Lodge Motor Hotel's parking lot in order to accommodate the realignment of the Victoria Bridge; The photoprint has been bent and rolled.

Photographer unknown, was received with fonds from Land Department, City of Calgary, Alberta