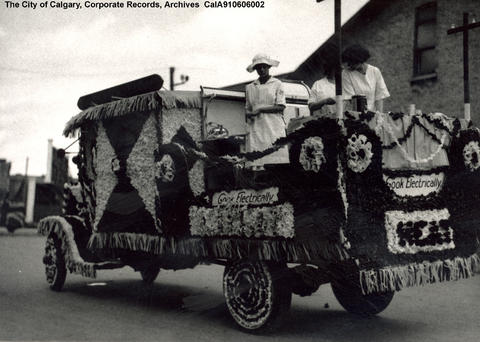 Items consist of one negative and one copy print of the float. Title is taken from the subject matter of the photograph;This "Cook Electrically" float was a first prize winner and featured the electric range. The range was just introduced into the Calgary market. The float was put together by the Calgary Municipal Electric Light, Heat, and Power Company;Gladys Belbin was one of the women on the float. She was employed as a clerk, secretary and records clerk. She was hired on July 24,1922. She was also the Superintendent/General Manager's Secretary from 1929-1964. She died in 1974;35mm negative located in Box 02, Bay 222, Shelf 05