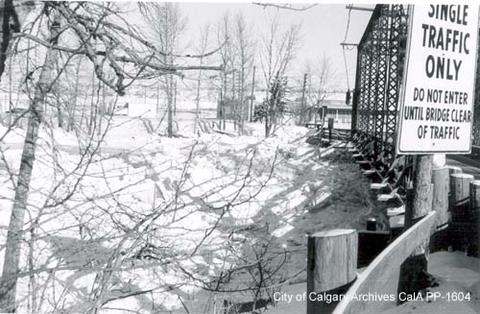 The item consists of a photograph of the ice jam on the Bow River near St. George's Island bridge in Calgary at 12 noon, 1959 January 20;Photo was taken looking north from the south end of St. George's Island on the North Channel Bridge;Sign on the bridge in the photograph states "Single Traffic Only. Do not enter until bridge clear of traffic;Stamped in red on the verso is "Jan 20 1959;Stamped in black on the verso is "023;Henderson's Directory for 1962 indicates that M.H. Dodwell was an investigator for City Transit;Boarder of the photograph has holes in all corners from where staples have been removed.