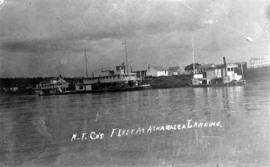 In 1947 Frank and Iola George moved from Leross, SK to a farm 11 miles from Colinton, AB. Iola worked in the Colinton School District office and later taught school at Paxson, Colinton and Athabasca. They moved to Athabasca when Iola became matron of Pleasant Valley Lodge; Frank was the maintenance man. They had 2 children: Marjorie and William. Frank died in 1974 in Rimbey, AB.

The fonds consists of four B&W photographs of Athabasca scenes in ca. 1912 including: boatbuilding, ferries, Northern Transportation Company and the steamboat: Northland Sun.

No further accruals are expected