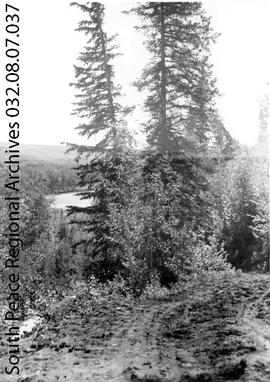 Trail to the Wapiti.

Wapiti Mines vehicle trail leading through the pines down to the Wapiti River. 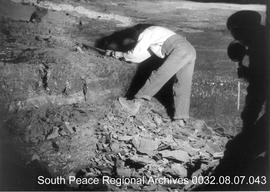 Coal miner working on a vein.

Coal miner digging at a vein of coal with a pick 350 feet into the earth at a Wapiti Coal Mine. 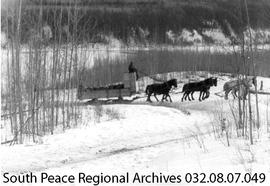 A six-horse team pulls a sled full of coal up Wapiti Hill, with the driver perched on top of the "caboose" at the front of the sled. 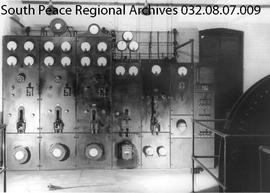 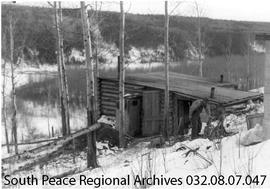 Landscape view of the outbuildings of a coal mine on the banks of the Wapiti River, with one of the workers chopping firewood in the foreground. 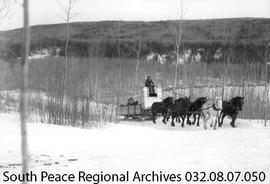 Frontal view of six-horse team pulling a sled of coal up Wapiti Hill. The driver is directing the horses from the top of his "caboose" at the front of the sled. 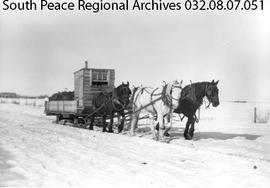 Roy Campbell's coal wagon, on the highway west of town, bringing a load of coal into Grande Prairie. The sleigh has a built-in caboose on the front to protect the driver. 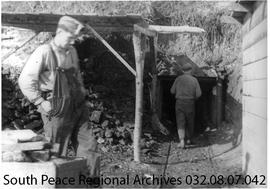 Coal Miners at Augustine's Mine.

Two coal miners at the entrance to Augustine's mine on the banks of the Wapiti River. 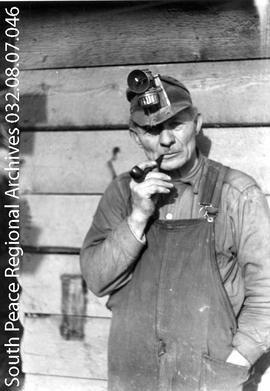 Informal portrait of Ted Z., a coal miner in full gear, smoking his pipe. In the background is one of the coal mine's outbuildings. 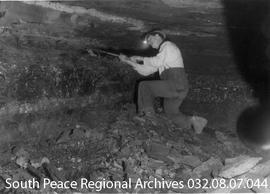 Miner working on a vein.

Side view of a coal miner with hat and lamp working on a vein of coal 350 feet into a Wapiti Coal Mine.