The sub-series consists of some certificates of awards given to Miss Campbell during her lifetime, and memorial records her funeral: obituaries, funeral service card, guest book, cards of condolence and written memories of Isabel; and a collection of news articles, mostly written after her death, about the impact she has had on the community of Grande Prairie and on the Peace Country.

The sub-series consists of colour slides of historical sites such as Dunvegan, Kleskun Hill Park, and Hudson Hope Dam; historic buildings at Grande Prairie, Flying Shot Lake, and Pipestone Creek; natural sites such as the Red Willow River, Simonette River, Smoky River, Wapiti River, Bad Heart District, and Richmond Hill Golf Club; and historical churches, schools, and ferries. Most of the slides are unidentified by the photographer. There is one photograph of the Bousefield Homestead and some of the Clyde Campbell Homestead which are identified. There are also slides of Isabel's home and garden in Grande Prairie from 1965 to 1980. 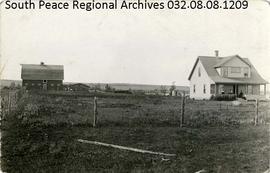 House, barn, and outbuildings on Henry Roberts’ farm. The caption on the back states: “Ten Thousand bushels of wheat raised on this farm of Henry Roberts of Bear Lake in 1917.” The photograph was enclosed in a letter to Isabel Campbell from Margaret Adams (nee McDonald), formerly a teacher at Flying Shot. 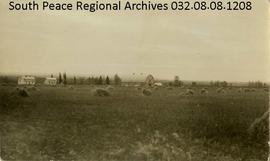 Barn and bunkhouses on the Adairs’ Sunset Ranch. There are two captions on the back: “Malcolm Campbell brought this photo to Vancouver about 1917 when he worked so hard to promote the P.G.E. from Vancouver to the Peace River. Each winter he visited Vancouver newspapers to get them to publish articles about the Peace River.” “L. H. Adair has raised 65,000 bushels of oats on this farm in one year”. The photograph was enclosed in a letter to Isabel Campbell from Margaret Adams (nee McDonald), formerly a teacher at Flying Shot. 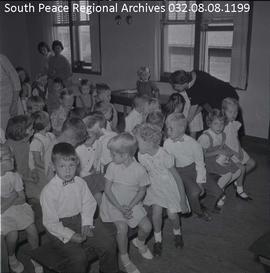 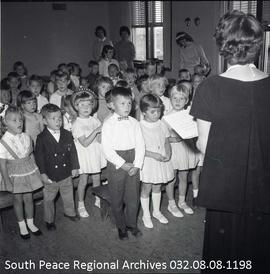 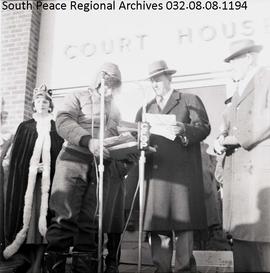 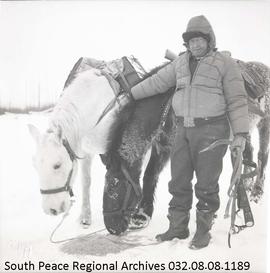 Henry McCullough and his Horses

Henry McCullough with his horses, paused on his journey to carry the Grande Prairie City charter to Mayor J. C. Mackie. 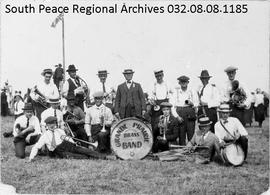 The Grande Prairie Brass Band with their instruments at an event, perhaps Sports Day. 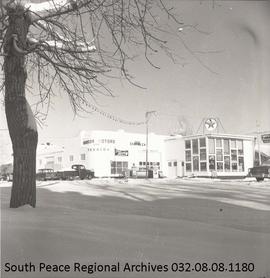 Grande Prairie’s Windsor Motors Ltd. in winter. Several vehicles are parked outside, including a car at the gas pumps.