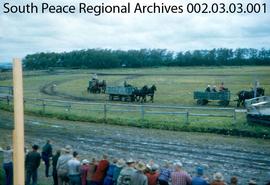 Chuckwagons at the Grande Prairie Agricultural Fair grounds where the Crystal Park School is now situated. 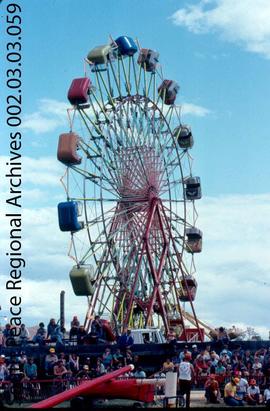 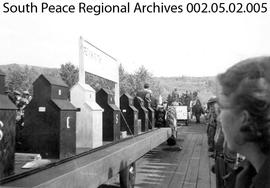 Sexsmith Parade Float advertising the grain capital of the British Empire during the opening of the Smoky River Bridge. 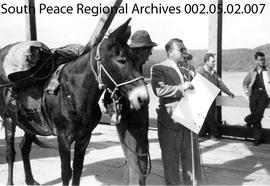 Slim Finch dressed up as "Baldy Red" standing beside a pack horse. Art Balfour, manager of the CFGP radio station, is speaking into a microphone beside him on the Smoky River Bridge for its opening celebration of Aug. 14, 1949.

Four horses are pulling an original stagecoach driven by Hugh Thompson and Dr. O'Brien Sr. in the parade for the celebration of the opening of the first bridge over the Big Smoky River on Aug.14, 1949. 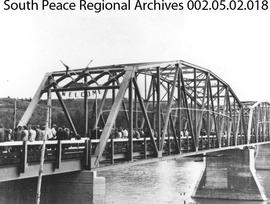 A large crowd is standing on the Smoky River Bridge during its opening celebration on Aug. 14, 1949. 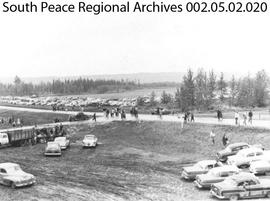 People are walking by a lot of automobiles & a truck parked in a field for the opening of the Smokey River Bridge celebration on Aug. 14, 1949. 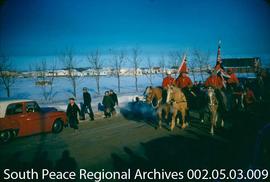 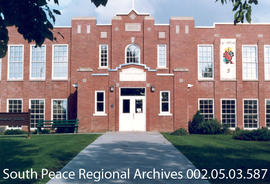 The Central Park High School, built in 1929, was renovated to house the Prairie Art Gallery in 1989. 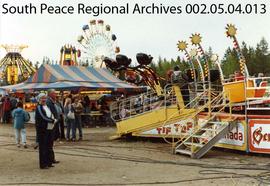 Rides, boothes and people at the M.F. Wagner Shows Midway display, during the 1983 Stompede.