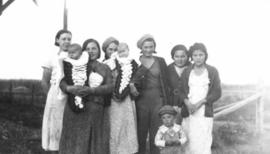 Wives and children of the Metis threshing crew at Tom Sheehan's farm near Clairmont include Louise Webber, Mrs. Dave Capot and Mrs. Dan McLean. The babies are strapped into the traditional moss bags which took the place of diapers.

The fonds consists of letters from the Lubicon Lake Indian Nation enclosing copies of documents supporting their land claim: statements from government and Lubicon officials; letters to and from the same; supporting resolutions from other Native bands; newsclippings of articles, editorials, cartoons and reader comments which support their position. Also included are direct statements from the Lubicon Lake Indian Nation, the March 1990 report from the Human Rights Committee (sent May 10, 1990), and The Lubicon Settlement Commission of Review Final Report, issued in March of 1993. 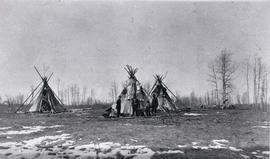 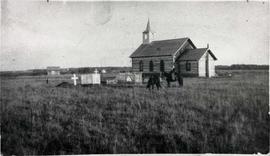 Image shows a woman on horseback, beside another horse, standing in front of the Roman Catholic Church and cemetery. The first Roman Catholic Mission to be established in the Grande Prairie District was built by Father Alac with the aid of Brother Mathias about 1909. The Catholic population at this time consisted of about 20 Cree families located around the Flying Shot Lake area. The title is taken from the caption on the back of the photograph. 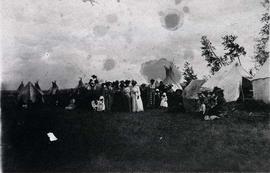 A crowd is gathered in front of teepees and tents at the Lake Saskatoon sports, July 1, 1910. 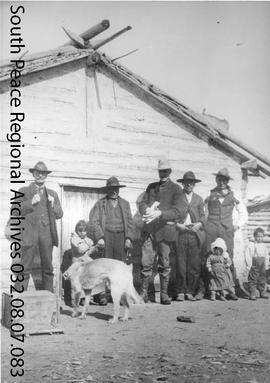 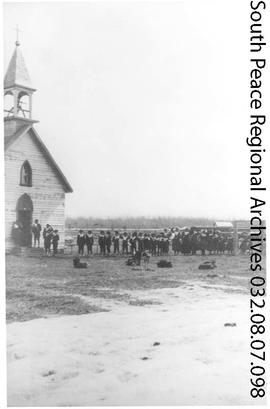 Residential school students outside the Mission Church at Sturgeon Lake.

The fonds consists of: documents regarding trap-lines 1899, 4543, (snaring permit 1807) and 7219; a series of licenses and receipts from various government departments for big game licenses and trap-line renewals, 1942- 1965; letters from the departments regarding renewal licenses; a market report from the Little Bros. Fur Sales Agency in 1950; receipts for groceries and dry goods; and documents evidencing his employment as a casual laborer with the Department of Highways, 1957.