The fonds consists of family genealogical records, documents, diaries, correspondence and photographs from the Campbell, McGuire and Brewer families; documents and photographs to the Campbell homestead at Halcourt; a collection of artwork, including a set of hand-made Christmas Cards drawn by Myrle and Isabel in the late 1920s; personal and business correspondence; historical writings by Isabel Campbell; records from Miss Campbell’s home in Grande Prairie; a reference collection of photographs, maps, and clippings files relating to Peace Country history; a set of glass negatives created in 1936-37 by Cameron White of the White Studio; and memorial records from Isabel’s funeral.

The series consists of genealogical records of the Campbell family researched by Isabel Campbell between 1957 and 1983. The collection includes correspondence with the sources of the information, an essay called "Kirnan and the Campbells" written by Paul Kester in 1932, a pamphlet from "The Clan Campbell Society (U.S.A.), and a 1916 issue of "The Campbell Family Magazine" published in New York.

The series consists of documents and photographs relating to Clyde Campbell, his wife Myrle, and their daughter Isabel. The documents include letters written by Clyde Campbell to his wife Myrle before and after marriage; blueprints of laboratories designed by Mr. Campbell; communications and documents from the War Department regarding Clyde Campbell; certificates from his pharmacy and his involvement with the Masonic Lodge. There is also a transcript of his funeral service and copies of obituaries. The photographs are of Clyde Campbell, Myrle McGuire Campbell, and their daughter Isabel Campbell at various stages of life. The collection includes photos of Isabel receiving awards for her contributions to history in the Grande Prairie area in the 1990s. 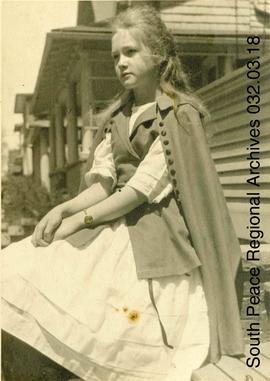 Childhood portrait of Isabel Campbell as a young girl in the United States.

The sub-series consists of genealogical records from the McGuire family bible, marriage and duplicate birth certificates, news clippings and correspondence. There is also a wooden guest book with articles on Ellen McGuire from her 92nd birthday until her death, and a photograph album of the McGuire family from 1920 onwards.

The sub-series includes 32 photographs belonging to Mr. and Mrs. Franklin Brewer, Isabel Campbell's mother and step-father. Subjects include the opening of the Smoky River bridge in the summer of 1949, a trip up the Mackenzie Highway from Rio Grande, a trip up the Alaska Highway as far as Ft. St. John, daughter Francis Brewer, the Lois and Jim Simpson family, friend of the family Edna Moyer, and the obituaries of Eli Pandachuck , Bernice Pandachuck and Edna Moyer. Also included are photos taken of a geological picnic at Kleskun Hills which feature Robert Cochrane as speaker. a eulogy written by Isabel on the death of her father. 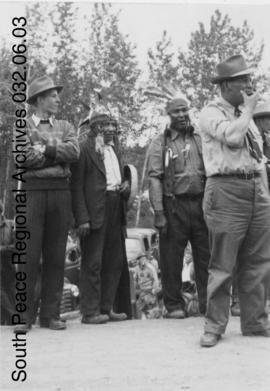 Image shows a group of men, including two Indigenous men wearing regalia, at the opening of the Smoky River Bridge in 1949. The back of the photograph says "Note tom tom" 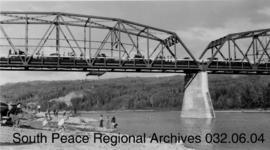 Photograph taken at the opening of the Smoky River bridge in the summer of 1949. View of the bridge from the shoreline.