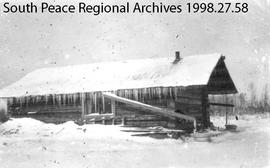 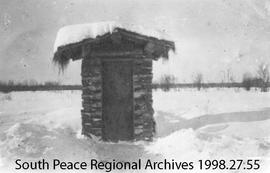 Log cabin outhouse on the Campbell family homestead in the dead of winter.

The fonds consists of family genealogical records, documents, diaries, correspondence and photographs from the Campbell, McGuire and Brewer families; documents and photographs to the Campbell homestead at Halcourt; a collection of artwork, including a set of hand-made Christmas Cards drawn by Myrle and Isabel in the late 1920s; personal and business correspondence; historical writings by Isabel Campbell; records from Miss Campbell’s home in Grande Prairie; a reference collection of photographs, maps, and clippings files relating to Peace Country history; a set of glass negatives created in 1936-37 by Cameron White of the White Studio; and memorial records from Isabel’s funeral. 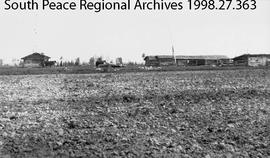 Outbuildings on the Campbell family homestead at Elmworth, Alberta. 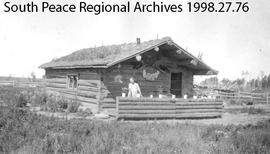 Isabel Campbell on the front porch of the Campbell cabin, when it still had a sod roof. 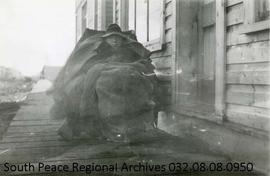 Camped Outside the Grouard Land Office

A man sitting huddled under a pile of robes at the Grouard Dominion Lands Office. There are two captions on the back of the photograph: “Pioneer Series 1/2. Man camping day and night at the Grouard land office to file, October, 1913. Photo by W. D. Albright.” “In the first years of Grande Prairie Settlement applications for Homsteads [sic] were made at the Grouard Land Office. Later Peter Tompkins and Harry Turton made, I believe, monthly trips to Lake Saskatoon to take applications and eventually an Office was opened in Grande Prairie. A. H. McQuarrie”. 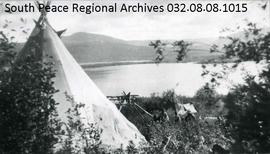 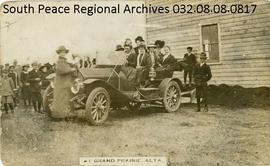 One of the captions on the back reads: “One of the first cars to come over the Trail. Mrs. James Scott can be seen in the front seat on the left side. It was in 1913.” The photograph was taken outside the old Grande Prairie post office. The photograph was contributed by Mrs. Jack Fitzpatrick. 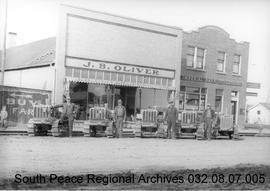 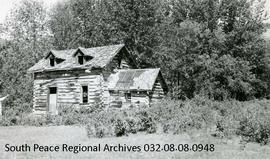 An abandoned Catholic mission building near Fort St. John, British Columbia. The caption on the back of the photograph states: “The little old Catholic Misison Church at Old Ft. St John about 8 miles from (New) Ft. St John Town – on Alaska Highway at the Hudson Bay Trading Post — the 1st settlers in the early days of Canada.”