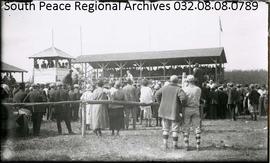 A large number of spectators gathered in the grand stand and on the ground to watch a boxing match in a raised ring at the Grande Prairie sports grounds.

The sub-series includes 32 photographs belonging to Mr. and Mrs. Franklin Brewer, Isabel Campbell's mother and step-father. Subjects include the opening of the Smoky River bridge in the summer of 1949, a trip up the Mackenzie Highway from Rio Grande, a trip up the Alaska Highway as far as Ft. St. John, daughter Francis Brewer, the Lois and Jim Simpson family, friend of the family Edna Moyer, and the obituaries of Eli Pandachuck , Bernice Pandachuck and Edna Moyer. Also included are photos taken of a geological picnic at Kleskun Hills which feature Robert Cochrane as speaker. a eulogy written by Isabel on the death of her father. 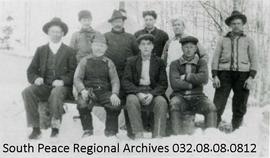 Bridging Crew on the Edson Trail

Bridging crew on the Edson Trail, 1911, including Steve Ward (centre, seated) and Andrew Kozina (standing, with moustache). The photograph was contributed by Walter Ward. 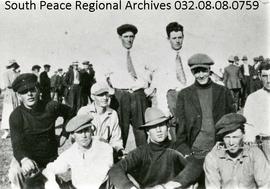 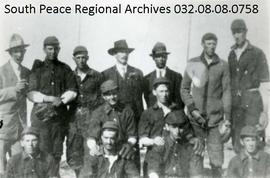 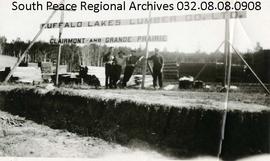 “Irish” O’Brien, Clarence Raison, Gerald Carveth, and ? at Mile 17 (near Webster) of the Edmonton, Dunvegan, and British Columbia railway. The men are standing under a sign for the Buffalo Lakes Lumber Co. Ltd. 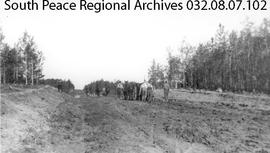 Men, horses and machinery on a newly constructed road, with ditches and bush on each side. 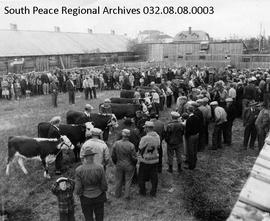 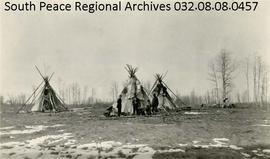 Image shows four Indigenous people standing together outside several tipis at the Beaverlodge River. The photograph appears to have been acquired from Lovering based on the name written on the back of the photograph.