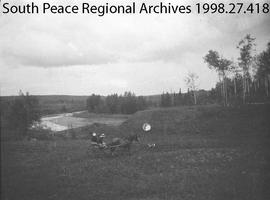 Along Side the Red Willow River

Myrle and Isabel Campbell ride down to the Red Willow River which ran along side their homestead. 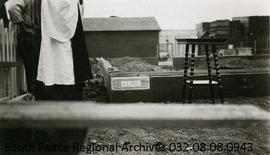 Cornerstone for the Anglican Church at Flying Shot Lake after it was laid by Mrs. Tissington.

The sub-series consists of pencil sketches, pencil crayon and pastel drawings, and a scrapbook containing hand-made cards made by Myrle and Isabel in the late 1920s. There is also a 1929 National Art School Certificate from Chicago, Illinois. 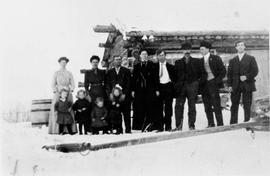 At the Connolly Cabin

A group of people gathered at the Connolly cabin, including (left to right) Mrs. Connolly and her daughter Helen, Mrs. Sexsmith with George and Wally, Mr. and Mrs. Murphy, Asa Connolly, Hugh McGuire, Pete Klassen, and Alfred Ward. The photograph was possibly contributed by Walter Ward.

Stopping Place on Athabasca River on the Edson Trail. 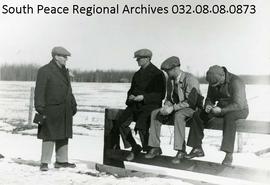 The sub-series consists of some certificates of awards given to Miss Campbell during her lifetime, and memorial records her funeral: obituaries, funeral service card, guest book, cards of condolence and written memories of Isabel; and a collection of news articles, mostly written after her death, about the impact she has had on the community of Grande Prairie and on the Peace Country.

The sub-series consists of the baby book the Campbell’s kept for Isabel and includes a small number of photographs within the book.