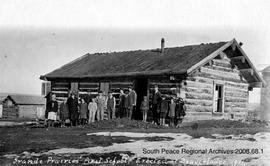 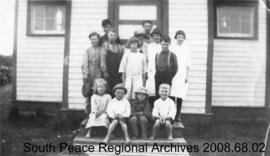 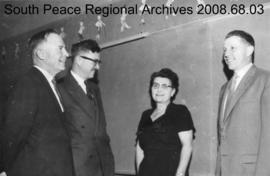 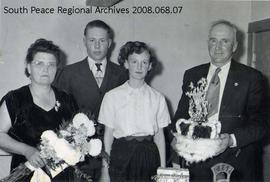 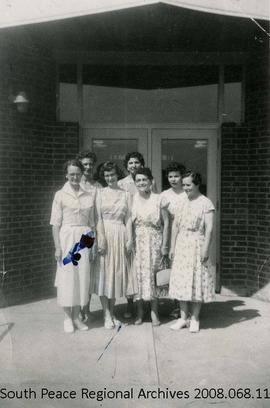 Gordon Moyer came to the Elmworth area in 1915, walking all the way from the Smoky River with a heavy pack on his back. He spent his first winter in Carl Schieldge's cabin where he and George Grant and Irish Beggs lived on saddles of five rabbits a day supplemented by the sourdough bread that George Grant taught them to make. Gordon filed on a homestead NE 15-70-11 and his first cabin cost him $6.00 for glass and a door; a cabin where it rained for three days inside after it had ceased outside because of the sod roof. Gordon worked with and was a friend of Mr. Albright at what was known then as "The Illustration Station". Gordon was very active in the Wheat Pool and U.F.A. business and was honored at the Seed Growers' Convention in Edmonton in 1949 as a Robertson Associate for his 20 years of service in seed growing. In 1951 his sample of Victory Oats won the World Championship in Chicago's Hay and Grain Show and in 1953, and his Alsike Clover won the World Championship for small-seed varieties. Gordon passed away in 1953 at the age of 58. Edna Pearl Small was born in Mt. Forest, Ontario, October 22, 1900. Between 1918-1919, she came to teach at Teeters S.D. near Czar, Alberta. In March , 1919, instead of starting Normal School training, she was recruited to come to Elmworth School as their first teacher. Edna spent the summer of 1920 in the Brewer home in the Elmworth district of the Peace country and in 1921, she attended Camrose Normal School and then began teaching in Vahalla in 1921-22 and in Halcourt in 1922-23. She then spent several years teaching in central and southern Alberta but always spent summer holidays in Elmworth. In 1925 she taught in Currie School near Clairmont and in 1926 she taught in Crystal Creek near Grande Prairie. She then left for Hartford, Connecticut, where she lived with her aunt and uncle for three years. In 1929, Edna married Gordon Moyer who farmed in Elmworth. The couple had two children, Gordon Jr. and Alice. During her married years she taught at Elmworth for two years in 1933-34, at Itipaw for a few months in 1939-40, at Haven School in Hinton Trail for a year in 1941-1942, and in Elmworth between 1946-1948. Following her husband's death in 1953, Edna bcame a member of the teaching staff in Grande Prairie and was principal of Swanavon School until her retirement in 1969. She retired to Kelowna and died in September, 1996, at the age of 96.

These records were donated to the South Peace Regional Archives by Alice Lewis, daughter of Gordon and Edna Moyer, in 2008. An accrual was added from Isabel Campbell's reference files which were acquired from the Grande Prairie Public Library in 2013. These materials were part of a bequest by Isabel Campbell to the Library. The files were then donated to the archives in 2013. An accrual was added by Alice Lewis in 2016.

The fonds consists of records of Edna's Camrose Normal School "criticism of lesson" reports and other documents related to teacher training (1921-1958), a sample lesson plan (1922), two teaching certificates,(1923, 1958), superintendents' reports from the schools where she taught (1925-1926), correspondence from school authorities and from students' parents, (1923-1977), a biography by Gordon, the given by J.E. Birdsall in honour of Gordon, a speech given at his funeral and two issues of the Ford Farming magazine (Spring, Fall 1953), a Swanavon School opening program, a copy of a travel itinerary, her Christmas greetings letter (1989), and seven photographs related to her school history. Gordon's records include a Dept. of Agriculture letter asking him to serve as a director of the W.W. Albright Scholarship Fund, a news clipping showing a group of Canadians admiring his prize oat sample (1946-1953) and "The Book of Mom which Alice (Moyer) Lewis has written about growing up in Elmworth.

These records were donated to the South Peace Regional Archives by Alice Lewis, daughter of Gordon and Edna Moyer, in 2008.

A finding aid is available at http://southpeacearchives.org/gordon-edna-moyer-fonds/