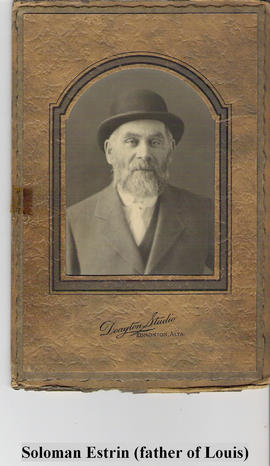 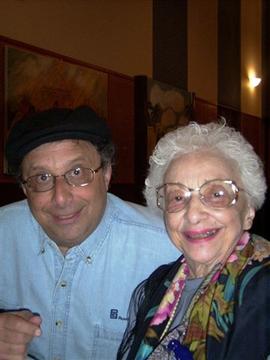 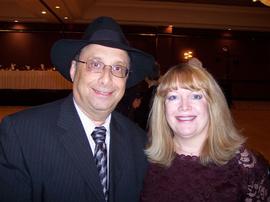 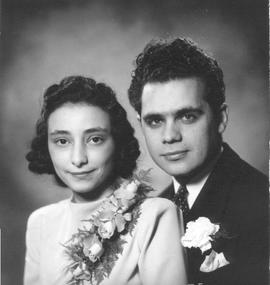 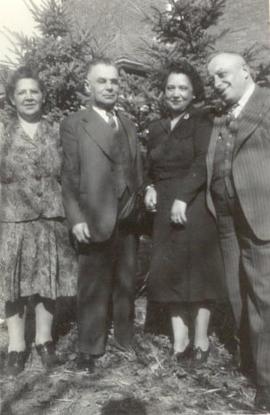 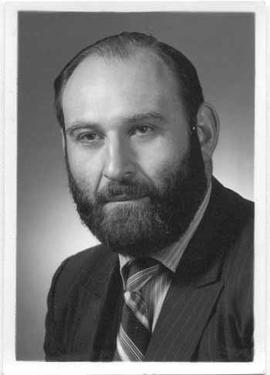 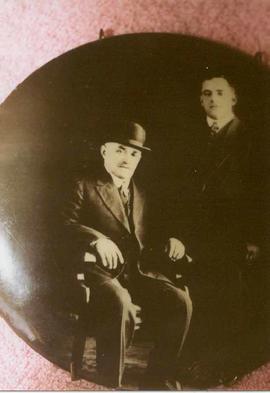 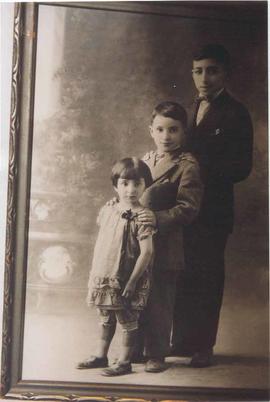 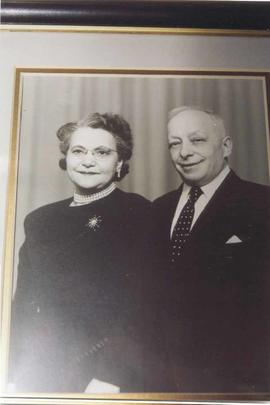 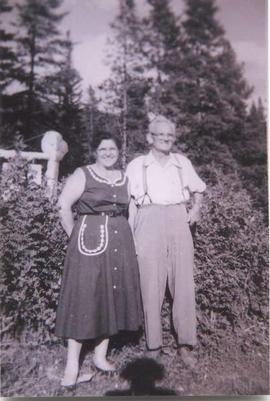 In 1911, Solomon and Mariasha Estrin, their son, Benjamin and daughter, Zivia left Krosnepolia, Belarus for Canada. Their sons Harry (Hy), Louis and Abraham (born June 5, 1896) and Louis's wife Sarah came later (there were also Benjamin and Sophie). Abe arrived in Montreal in 1912. In 1914 the Estrin family settled on a homestead in Compeer, Alberta. Solomon, Abe and Harry each received one quarter section of land to farm. Unfortunately, the land proved unworkable. In 1919, Mariasha became ill and died. Solomon then took a job as Sexton at the Beth Israel Synagogue in Edmonton, and Abe went with him. Solomon worked at the synagogue until his death in 1932. Abe bought Cassidy's grocery store on 124th St. He then became a fur buyer, investing his profits in a small retail store, the Standard Exchange, which he opened on 101st Street in 1923. In 1922, Solomon met and married Esther Gofsky from Calgary in 1922. Louis' son Hy married Goldy Hurtig in 1941. They had two sons, Bernie and David. Hy owned and operated "Mr. Suede" Drycleaners in Edmonton. Abraham married Esther's daughter Rebecca in 1925. Their daughter Phyllis was born in 1926. She later married Dr. Tom Hardin. In 1933, Rebecca gave birth to Solomon, then in 1935 to Teviah, and in 1940, to Esther. Esther later married Howard Starkman. Abe was a life-long member of the Beth Israel Synagogue, and served as President of the Edmonton Hebrew School from 1938-1942. He was also active in the Chevra Kadisha for 40 years. Abe died of cancer on October 29, 1973. Rebecca Estrin was hit by a car on December 15, 1974 and died instantly.

The fonds consists of materials created by the Estrin family from 1922-2004. Materials include a family history, immigration and naturalization certificates, a marriage certificate, birth certificate and photos.

Material was donated by Goldy Hurtig Estrin, wife of Hy Estrin in 1999, and by Esther Starkman, and by Bernie Estrin in 2004. Folio photo of Peretz Shul donated by Dr. Tom Hardin in 2006.