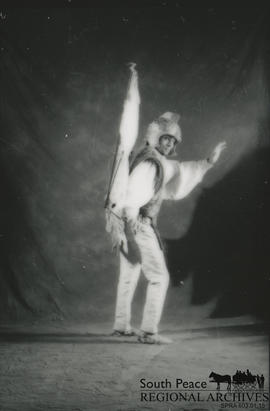 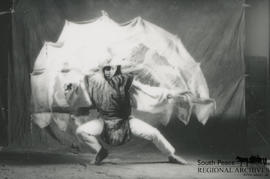 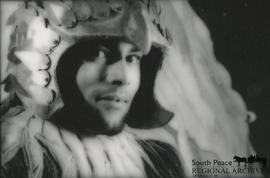 The Culture Division, one of the divisions of the Host Committee management committee, had a mandate to “showcase” local artists and those from other provinces and territories and to expose people to northern Alberta culture. The overall theme for the cultural program was “Iskoteo”, the Cree word for the Northern Lights, which were the inspiration for the theme, logo, and theme poem. Cultural division fundraisers, including the sale of buttons, the Light Up Grande Prairie Christmas light campaign (with the Grande Prairie Minor Hockey Association), and a truck raffle (with the South Peace Ball Association), we held to cover costs so that all cultural events could be provided free to the public. Funding was also obtained from Canadian Heritage’s Cultural Initiatives Program, Province of Alberta programs, and sponsors. The programs had six parts: Visual Arts, Performing Arts, Aboriginal Experience, Literary Arts, Venue Entertainment, and Holistic Arts. Other local groups, including Second Street Theatre and Grande Prairie Regional College Theatre also held cultural events during the Games. The Opening and Closing Ceremonies were not planned by the Culture Division. The Visual Arts program included the erection of “The Pinnacle” obelisk sculpture by Rudi Schmidt outside Canada Games Arena, Prairie Art Gallery shows, the “Iskoteo” juried art show at Towne Centre Mall, the Alberta Craft Council exhibit “Craft About Us”, the large Iskoteo logo in the windows of 214 Place, murals on chainlink fences by kids, the Arts and Crafts Marketplace at the Centre for Creative Arts, and the Artwalk Brochure. The Literary Arts program consisted of a contest for French and English written works and black and white drawings on the Iskoteo theme. The winning entries were published as the “Iskoteo Anthology” and given as a VIP gift. The stories were also made available to the public and the winning art entries displayed at the library. The Holistic Arts program was centered at the Holistic Centre at Queen Elizabeth II Hospital and included aromatherapy, African drum workshops, massage, and reflexology. The Performing Arts program was centered at Muskoseepi Park and had several elements, including the nightly “Fire in the Sky” program starting with the medal winners of the day in the AGT March of Champions and including a five part multi-media show presenting the history of the Peace Country from the time of the dinosaurs to the 1995 Games using video, live performers, puppets, and lasers , the “Spirit of the People” tent featuring performers from a different province or territory each night, and the “Kulture Koffee House” in the Pavilion with performances by local artists and out of province guests. Canada House also featured four hours of entertainment each day and there were live performers at each sports venue. The Aboriginal Experience featured First Nations, Metis, and Inuit cultures for 12 hours a day at St. Clement School, including performances and the Aboriginal Arts and Crafts Marketplace. Sources: “The Best Games Ever” 1995 Canada Games Final Report (ca. 1996)

The series consists of the records of the Cultural Division of the 1995 Grande Prairie Canada Winter Games Host Committee. The records were created primarily by Dr. Jack Wynters, Jim Nelson, and Carol-Lee Eckhardt in the course of planning and producing the “Fire in the Sky” evening performances. The textual records include a few different versions of the “Fire in the Sky” episode scripts written by Jim Nelson and altered by Jack Wynters, film stock recommendations, proposals and contracts, filming arrangements, costs, and shooting schedules, puppet and character sketches, a preliminary program, site plans and maps, a project list, a schedule, a rehearsal schedule, minutes of a production meeting, publicity flyers and schedules, and correspondence regarding hot air balloons, Iskoteo and puppet design, lasers, screen, advertisers, supplies, fireworks, ampitheatre, production costs, drummers, and costumes. The scripts have been arranged by the Archivist in files by episode and chronologically by version within each file. Loose records were inserted into the “Planning Documents” file, which was roughly chronological and had its original order retained by the Archivist. Where there were separate files, ie. for “Iskoteo and Puppet Design” and “Laser”, they were maintained. The photographs include 35 contact sheet prints of the Iskoteo character and two prints of the 12 Foot Davis character. The audio-visual material includes two videos produced by Alberta Tourism and used as source material, one video of equipment tests, six videos of source material created by the Cultural Division, one video of partially completed shows, three videos of completed shows, three audio tapes of “Fire in the Sky” narrations and audio, and one audio tape of the “Capture the Vision” theme song.