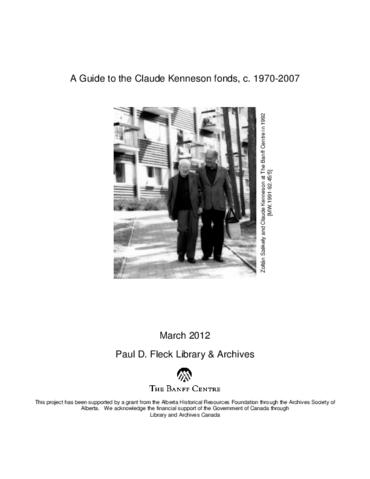 <p>Claude Kenneson is a cellist, and was a music professor at the University of Alberta from 1965 to 1990. He was a founder of the University of Alberta String Quartet in 1969. The Quartet assisted Zoltan Szekely to teach master classes at the University of Alberta in the mid-1970s. Kenneson taught at the Banff Centre in the 1970s and 1980s, continuing his connection with Szekely there.<p>In 1991 Kenneson began his biography of Szekely. As part of the project he inventoried many of Szekely's scores, books and other materials and stored them in the Banff Centre Library. His book, Szekely and Bartok: The story of a friendship, was published in 1994.<p>Kenneson also worked on Szekely's compositions, printing them and transcribing them for cello and other instruments.</p>

The fonds was donated by Claude Kenneson to the Banff Centre in 2009. Some of the photographs and sketches in the donation are described as part of the Zoltan Szekely fonds.