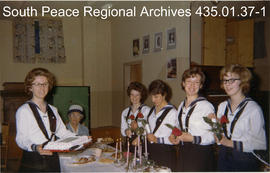 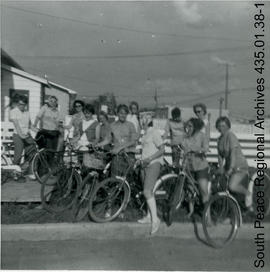 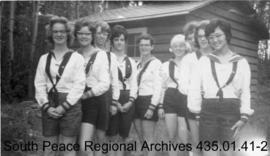 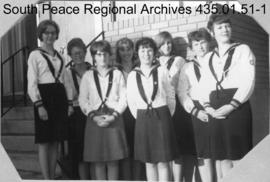 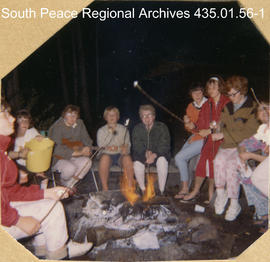 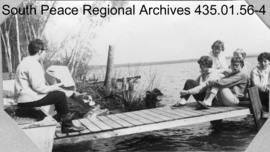 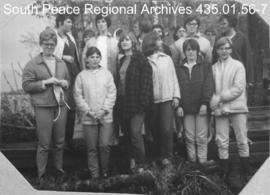 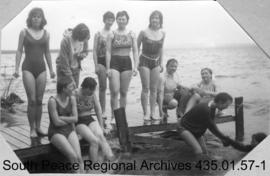 The "Honeybees" CGIT group associated with the United Church in Grande Prairie was led by Rosamond Wilson ("Honey") from 1960-1966 . Many of the girls had been Explorers previously and were now junior high school age. Over the next six years, under Rosemond's leadership, the girls formed a very cohesive bond and lasting friendships. The Canadian Girls in Training is designed for girls 12-17. They pledge " under the leadership of Jesus to seek truth, know God, serve others and thus with His help become the girl God would have me be." The group wore destinctive "middies" and regular meetings included devotions, activities and plans for community service. The group that graduated in 1966 included Leslie Murray, Lennie Lawrence, Linda Froggatt, Sharon Crough, Wendy Simpson, Marilyn Taylor, Margy Kujath Judi Barschel, Patty Wigelsworth, Donna Yakimchuk, and Margaret Edgson. Other members appearing in the records over the six years are Lynne Park, Maureen Ockert, Pam Donald, Karen Covey, and Inge Knells. A reunion of the group took place in 2001 at the home of the Wilsons in Sidney, BC.

The fonds consists of five scribblers of minutes (1960-1964) and financial records (1962-1966) and a scrapbook created by Rosamund Wilson's recording her six year leadership of "The Honeybees", a CGIT group in Grande Prairie. The scrapbook contains club records, news clippings and photographs of the Explorer and CGIT group called "The Honeybees" from 1957-1966. Also included is a copy of a valedictory speech given to the 1972 CGIT graduates and a letter and a 2 page collage of photographs from a reunion of the group in 2001.

A finding aid is available at http://southpeacearchives.org/cgit-honeybees/