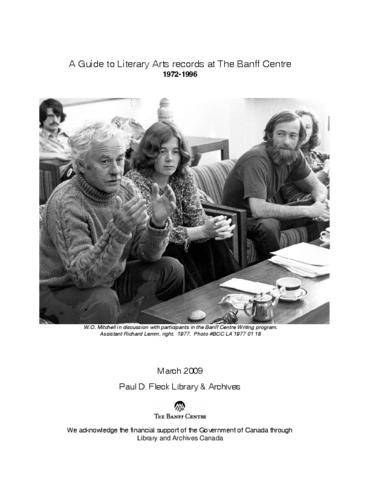 Early years, 1937-1972:;Writing programs at The Banff Centre date back to a course in playwriting in 1937, followed by courses in the short story beginning in 1943, with an emphasis on folklore. The School sponsored the annual Western Canada Writers' Conference between 1944 and 1950. Courses in various forms of creative writing were offered in the 1950's and 1960s, taught primarily through lectures, required readings, assignments and other structure teaching element. The playwriting component of the Writing program was moved into the Drama department in 1972 and became the Playwright's Colony. Writing program, 1974-1996;In 1974, the Writing Program was redesigned as a six-week seminar for serious creative writers headed by W.O. Mitchell with Sandra Jones and Ruth Fraser. For the first time, acceptance was by adjudication and the program sought to attract serious writers of proven ability. Many leading Canadian authors were brought in on short-term contracts to mentor participants and give talks and readings, including Robertson Davies, Irving Layton, Alistair MacLeod, Margaret Atwood and others, as well as prominent individuals in the CanLit scene such as Jack McClelland and Peter Gzowski. The program introduced Mitchell's method of 'free-fall' writing, which encouraged participants to produce and receive feedback on rough drafts as a way to inspire creativity. The program also offered editorial assistance and practical advice on aspects of becoming a professional author, such as publishing standards for manuscripts. The program produced an annual anthology of the best work from the program, entitled 'Free-Fall.';In 1980, a six-week winter pilot program was offered and became the Advanced Writing Studio, offering participants the chance to complete a major writing project. After Mitchell stepped down as head of the program in 1987, the summer writing workshops were discontinued. Adele Wiseman became director of the 6-week May Writing Studio. In 1991 Rachel Wyatt became Program Director. Publishing Workshop:;With the expansion of the School to year-round programming between 1979 and 1981, a four-week Publishing Workshop, taught by industry professionals, was created. Program heads were Yuri Rubinsky (1981-1986), Robert MacDonald (1987-1995) and Patricia FitzGerald (1996);Literary Journalism:;An arts journalism program ran from 1982 to 1986 to train artists in the craft of writing criticism and reviews. In 1987 an endowment from MacLean Hunter foundation, now Rogers Communication, matched by the government of Alberta, funded a new Arts Journalism program with a mandate to raise the standards of cultural journalism in Canada by providing established journalists with professional development and an opportunity to develop and publish a major essay in the domain of arts and culture. The first 4 week program was offered in 1989. By 1993, a Guest Lecture Series was established which brought leading essayists to Banff for popular lectures. Program heads during the period of the fonds were Robert Fulford (1989-1991) and Alberto Manguel (1992-1996).

Some access restrictions may apply in accordance with Freedom of Information and Protection of Privacy legislation. Please consult the archivist for more details.