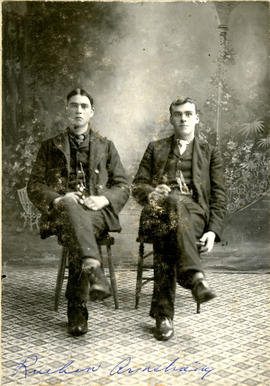 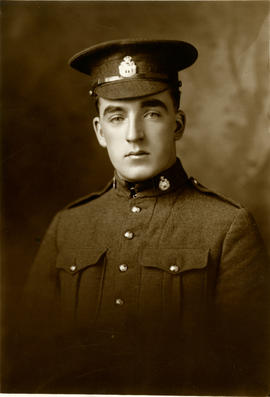 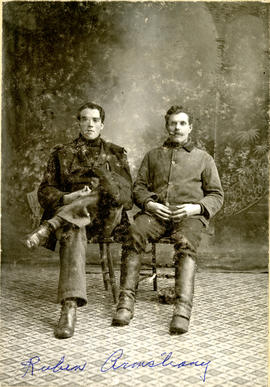 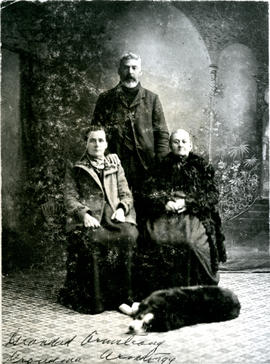 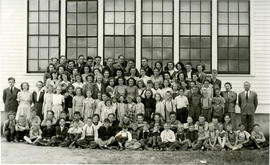 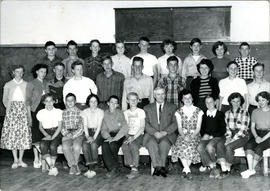 Susan Maria Whitman was born January 1, 1861 in Guelph, Ontario to parents John Whitman and Matilda Burkholder. At the age of 16 she married Thomas Blair Armstrong the son of Irish immigrant parents William Armstrong and Elizabeth Blair. Thomas was born May 14, 1851 in Mono, Ontario and he and Susan married April 28, 1877 in Wiarton, Bruce Co. Ontario. Thomas and Susan settled in Albemarle which was fairly remote and this is where their ten children were born. The children were: Frederick John (b.1877); Victoria Matilda (b.1879); Rueben Matthew (b.1881); Mary Louise (b.1883); Thomas Ashford (b.1885); Samuel Leo (b.1889); Gertrude Ruth (b.1891); David Edward (b.1896); Dessie Lavina (b.1898) and Ila Irene (b.1901). The family’s main source of income was farming and much time was spent clearing the land of the numerous trees in North Ontario.
Thomas Armstrong became ill and passed away April 12, 1914 at the family home located on Lot 21 Con. 1 and he is buried in Red Bay, Bruce Co., Ontario. The following year family decided to head west, Ed and Leo were sent ahead to file on the homestead, Sec 35-T72-R11 W6 west of Grande Prairie was the location chosen and the boys returned to Ontario. The Armstrong family by this time had been reduced in size as many of the older children had married or moved west. 1916, was the year of the big move, Ed, Leo, their mother Susan and sisters Ila and Dessie loaded their supplies and traveled to the end of the rail line in Grande Prairie. Once in there it took them four days to travel to their homestead near Hythe, Alberta.
Thomas Ashford Armstrong had been living in Arcola, Saskatchewan, where he farmed with Whitman relatives. It was here that he met and married Frances Murray and in 1917 they too joined the family in Hythe.
David Edward "Ed" was drafted in March of 1918, to serve in the war but was discharged months later as the war had ended. Dessie married Aubrey Hawkesworth at the Armstrong place on January 1, 1919 and moved to his homestead not too far away.
In 1920, Leo Armstrong was "rushed" by horse and wagon to Lake Saskatoon to see a Doctor, the family story is that Leo's hair had turned whilte due to the pain he was in. Leo's appendix had burst and he didn't survive, he is buried in Mountainside Cemetery. Thomas, his brother took over his homestead on Sec 2 T73 R 11 W6.
This is about the time that Susan and Ed started a boarding house in Hythe purchasing the Halfway House from Maurice Shapiro. Ed married Evelyn Everton on Nov.16, 1922 and they moved out to the farm.
In 1927 Ila and Susan left for Edmonton where Susan continued to run a boarding house. Ila married James M. Murray. Ila and James settled in Three Hills, Alberta and worked at the Prairie Bible Institute. When Ila’s mother Susan was unable to continue with her boarding house she too went to Three Hills where she lived until her passing in 1946. Susan is buried in the Three Hills Cemetery.
Thomas and Susan’s children ended up in various places throughout Canada.
Frederick John Armstrong married Henrietta Cooney of the famous Cooney family of Tranquille, B.C. They lived in Kamloops, B.C. After Henrietta passed away Fred married Audrey Hunter Carrall.
Victoria Matilda Armstrong ¬¬¬¬¬¬¬¬¬¬¬¬¬¬¬¬John Crawford Hodgson who passed away in 1919 and she then married Robert Clyde Settle and they lived in Victoria, B.C.
Rueben Matthew Armstrong moved to Arcola, Saskatchewan and it is unknown what happened to him.
Mary Louise Armstrong married John Nelson Armstrong and lived in Barrie, Simcoe Co., Ontario.
Thomas Ashford Armstrong married Frances Murray and lived near Hythe.
Gertrude Ruth Armstrong married Charles Clayton and stayed in Ontario.
David Edward married Evelyn Everton and stayed in the Hythe area.
Dessie Lavina married Aubrey Hawkesworth and lived near Hythe.
Ila Armstrong married James Murray and they lived in Three Hills, Alberta.

The records came into the Archives in two accessions from two different branches of the Armstrong family. Clayton Greber brought in a collection of photographs that he had received from a relative Allyson Ropchan who is a granddaughter of Dessie Armstrong.

Grace Wideman brought in a collection of photographs that had been passed down through her family, her branch of the family is through her grandfather David Edward "Ed" Armstrong. Grace also brought in two scrapbooks that she has made about the Armstrong family and descendants.

The fonds consists of records relating to the Armstrong family. The records are organized into three series, personal papers, photographs and scrapbooks.

A finding aid is available at http://southpeacearchives.org/fonds-632-armstrong-family-fonds/