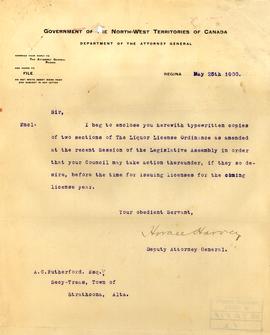 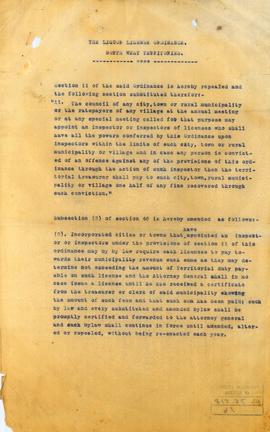 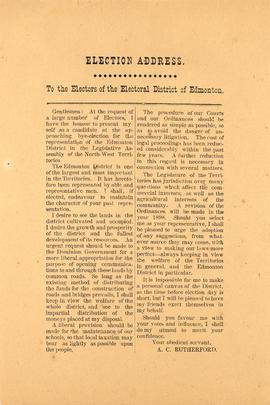 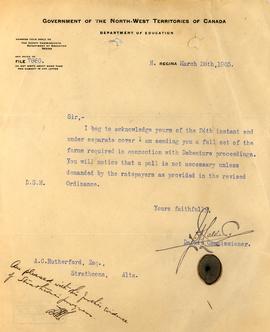 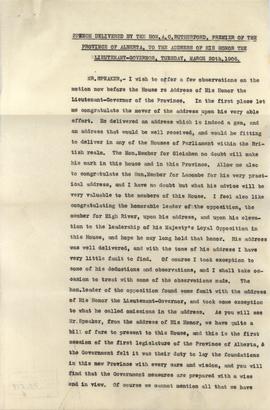 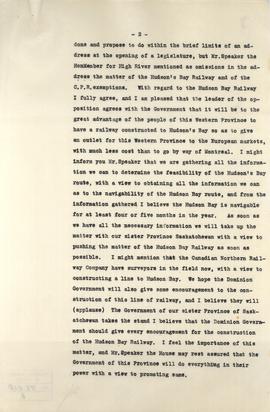 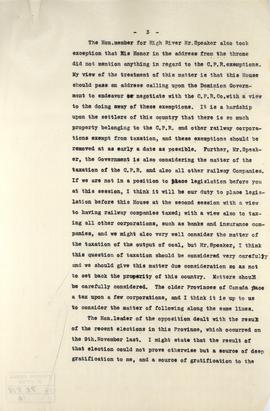 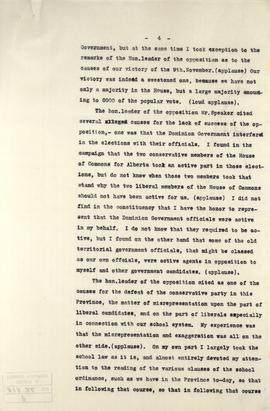 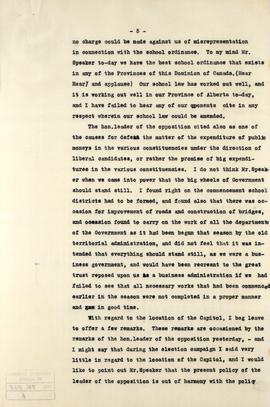 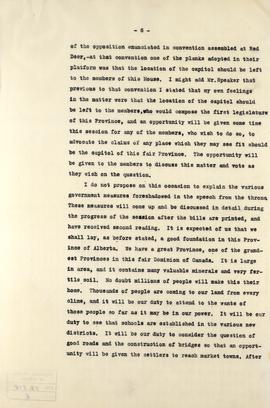 Alexander Cameron Rutherford was born in Osgoode, Carleton County, Ontario on February 2, 1857 to James and Elizabeth Cameron Rutherford. He was educated in the public and high schools in Metcalfe, Ontario and attended Woodstock College. In 1881 he received his Bachelor of Arts and Bachelor of Civil Law degrees from McGill University in Montreal, Quebec. He was called to the Bar of Ontario in 1885 and practiced law in Ottawa at the firm of Hodgins, Kidd and Rutherford. In 1895 he left the firm and moved to Strathcona, North-West Territories (now Alberta) where he became active in local politics. He served as secretary of the school board of Strathcona for nine years and as secretary-treasurer and solicitor for the Town of Strathcona from 1899 until 1905. He represented Strathcona on the council of the North-West Territories from 1902 until September 2, 1905 when he became the first Premier of Alberta. During his term as Premier he established a normal college and provincial university, and encouraged railway expansion, the agricultural industry and the mining industry. Rutherford also served as the Minister of Education and the Provincial Treasurer until his resignation as Premier on May 26, 1910. In 1924 he was appointed the West Member of the Board of Governors for McGill University and he served as Chancellor of the University of Alberta from 1927 until his death in 1941. A.C. Rutherford married Mattie Birkett in Ottawa in 1888. Together they had a son, Cecil and a daughter, Hazel.

Hazel McCuaig deposited most of the records in this fonds at the Provincial Archives of Alberta between 1969 and 1977. Helen Rutherford deposited two accessions of records at the archives in 1969.

Fonds consists of Rutherford's personal and business records, particularly records created in his capacity as a lawyer and as a politician. These records include political papers, financial records, ordinances, proceedings, policies, reports, publications, personal records, photographs, diplomas, newspapers and newspaper clippings. Also included in this fonds are a newspaper clipping and photograph dated after Rutherford's death. These two items were interfiled with Rutherford's papers when they were deposited in the Provincial Archives of Alberta in 1975. They probably belonged to a member of Rutherford's family and so were maintained within accession PR1975.518.

Some of the textual records are oversized