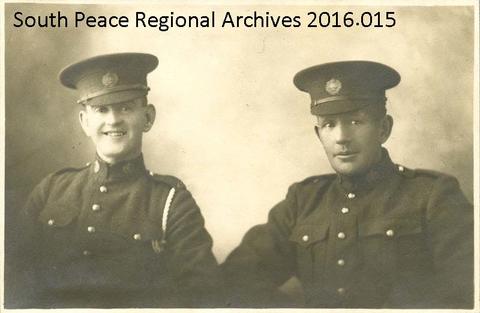 A photograph of James Robert McDonald and Kenneth Murray in their WWI uniforms. The men served in the 66th battalion in Edmonton.
James Robert McDonald was born March 29, 1885 in Woodstock, Ontario . James was a homesteaded on N.W. 14-71-9 to the Beaverlodge area arriving with Charles Edgerton. Charles and James set up a butcher shop and was one of the first people in that area to own a car. James served in WWI and returned to Beaverlodge after being injured in 1917.